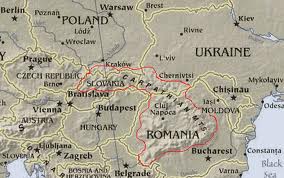 The Gods Of Bashan: Part 1 The Giants Of Romania

We are all familiar with the term, “President”; such as the president of a nation, or a corporation. It is a title representing someone of the highest authority; it is a rank; not a name. We could call a prominent leader, “Mr. President”, but again, there are hundreds if not thousands of individuals that can fall under that classification; it makes sense to differentiate between the personages by attaching a proper name.

The “King of Kings”, and the “Lord of Lords”! Again! Titles representing individuals of great authority.

Likewise, the term, “Nem-Rud” or Nimrod by modern day Anglican renditions, is also a term that represents “Men of Authority”. Nimrod is not a personal name, “It Is a Title”. There can be, and in fact have been many who fell under this classification.

The True meaning of this term is cloaked in linguistic mystery; in the ancient languages, it was attached to a powerful “War Leader”, who went out to conquer foreign lands, in much the same way that our modern day, “Secretary of State”, and high-ranking Generals are.

America sent troops to invade Iraq and Afghanistan. In those nations our troops can be classified as deaf and mute because they cannot communicate well with the native citizens. This is why “Nem-Rud” means “Mute Generation”.

Foreign invaders in a strange land!

Nimrod was also titled, “Sargon”, which means, “The Righteous King”.

My many years of archeological and historical investigation leads me to believe that the Babylonian “War Leader” named Nimrod was actually a member of the Royal Family of Giants that originally came from a much earlier civilization established long before in the Carpathian Mountains of Romania, Bosnia, Ukraine, Croatia. A very powerful and well established nation populated by the earliest Dacian, and Thracian Tribes, that actually survived the cataclysmic flood-water, of the famous “Noah’s Flood” Era. 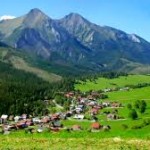 Amongst the Dacian and Thracian tribes, lived a group of highly advanced Space Travelers, of gigantic proportions 16 to 18 feet tall that maintained an underground space communications complex that is still functional even today. This underground base was discovered within the last decade and is now under jurisdiction of the United States and its NATO Allies.

The highly advanced computer technologies are directly connected to the underground Alien complex discovered in Iraq during the first Gulf War. All of the computers are fully functional and are still operating even unto today

Highly trained technicians from many countries are in the process learning how these computer systems operate, and are reverse engineering the technologies.

In Romania, there exists a giant complex of greater and lesser Pyramids, believed to have been built by these aliens thirty to forty thousand years ago, as well as many megalithic structures, and even a Sphinx built upon the very mountain, which contains the underground base. 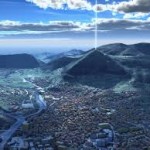 Within this valley, are several cemeteries, that contains hundreds of skeletal remains of Giants whose dimensions average from 12 to 18 feet in height.

In Truth! This is the original Cradle of Civilization!

It was thousands of years after the Flood that people finally traveled from the Carpathian mountain regions to settle within the flat Fertile-Crescent region of Mesopotamia.

There are many misconstrued fallacies recorded in the Bible!

Noah and his family were not the only survivors of the flood, locked safe within their hand-built boat. All over the world, amongst virtually every nation, and race of peoples, where found multitudes that were spared the flood-waters. There are many very high mountains in virtually every continent, and unlike the false report written in the Bible, the waters did not exceed the height of the tallest mountain ranges.

We must remember! The pre-flood era was occupied by very highly advanced people, many who maintained Arial flight, with both planes and space-craft. All over the world are ancient underground military, and communication bases. It is difficult to verify the actual numbers of cataclysmic survivors, but suffice to know that it was a large amount,

Another very terrible calamity effected the survivors of the cataclysmic event; the records of those early survivors has been corrupted beyond description by the bible redactors of the modern Christian Era, in order to establish a false image of the Monastic Creed.

According to biblical record, we are to understand that the God of Heaven, specifically sent this flood, by miraculous “Divine Intervention”, in order to destroy the races of Nephilim, and Rephaim, that have corrupted the Seed of the True Royal Blood Line of the Patriarchs future descendants, which will eventually lead to the One True Son of God, “Jesus Christ”.

People! This is a Fairy-Tale beyond imagination!!!

This is the furthest thing from truth; and simply bespeaks man’s ability to corrupt that truth.

The so called, Noah’s Flood took place some twelve thousand years ago, and was caused by a Pole Shift, which flipped our world upside down. This Pole Shift happened because of a planetary Fly-By that took place by the Planet Niburu, or Planet Wormwood, which passes our earth every three thousand six hundred years as it orbits our sun upon an elliptical orbit.

This is a Natural Phenomenon that plagues our planet with volatile instability throughout the course of millions of years; a cycle that continues and will continue far into the future. Modern Day Scientists, Geologists, and Anthropologist have come to realize, that the earth has been flooded by the same cataclysmic event no less than ten times in recent eras by geological terms.

The Elohim Giants, who set themselves up as the Gods of our earth, and its inhabitants knew that this flood was coming, for they were well aware of the astronomical planetary cycles of the cosmos. The survivors, such as Nimrod and his people, were angry that the Anunnaki Gods did little to help mankind survive the drastic event; consequently, millions perished.

The Anunnaki, simply left for space in their Arial spacecraft, and only took the most important, “Elite” governing authority bodies; the rest were simply disposable; they were slaves after all.

The Anunnaki Gods were divided in this matter, for there were those who had compassion for their “pet earthlings”; consequently, they gave fair warning; which started a myriad of boat building projects across the globe; others simply headed for high ground, or underground.

The King named Nem-Rud, promised the survivors, that we shall build our own space ports, which are the “Gates To Heaven”, and Rocket Ships, so that if this ever happened again, we will all be saved!

Just Like The Gods Saved Their Skins! We will save ours…

They were not building spaceports and spaceships in order to reach the invisible God of All Life and Creation, the “God of the Universe”; they just wanted access to the Gods that lived in Space upon different Planets, and interplanetary Mother-Ships, were the True Elite lived.

Nimrod has been falsely accused as being a Rebel against the Living God of all Life! This is simply a fallacy of modern day ignorant scribes…

Nimrod was angry with the Anunnaki God named Enlil; Jehovah in the Jewish language; and Zues in the Greek language.

A local tribal God that has caused nothing but trouble to earth’s inhabitants, since his arrival to earth.

He was trying to force himself upon the Babylonian Nation, as their one and only God; they were to disregard the other members of the Royal Family, and Pantheon of gods; and only obey him.

Nimrod refused! Because he knew that he was one of the primary conspirators in the death of millions of earth people and likewise, space travelers that were left behind in the mad dash to escape earth’s woes.

If Babylon was to accept a Space God, as the god of their Nation, it would be the One who actually help save mankind from the Flood, which of course was Lord Enki, Marduk and other members of his side of the family tree.

Nimrod and his fellow giants had technological knowledge and skills, what they did not have was access to sophisticated tools, equipment, spaceships, and more importantly, advanced weaponry. They needed to start from scratch…

Thusly! He assembled the multitudes, and they began building the new city, which represented not only independence from the slave masters, it exemplified freedom and salvation from further cataclysmic events.

We are taught that Nimrod was evil and wicked, because he was rejecting the God that would later become the God of the Jews; I personally accept him as a Hero and Champion of Humanity; who worked hard to break the yoke of Anunnaki Slave Masters.

Unfortunately! Those same Titan Gods had advanced plasma beam weapons, from which the earthlings had no defense; and their city was destroyed, and the people ran to other lands and nations to get away from the abusive Gods.