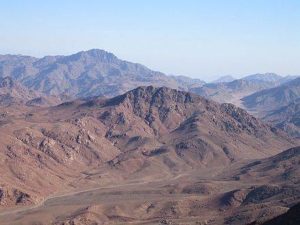 When Moses took refuge in the land of Midian to escape the displeasure of the Pharaoh, he met Jethro and settled near Mount Horeb. The land of Midian was in northeast Arabia on the eastern shore of the Gulf of Aqaba. From here the Midianites spread north into the Sinai and into Moab and the land west of Edom.

The Midianites called themselves “the sons of the serpent,” and apparently were descendants of the Anunnaki who were assigned the task of defending the installations at Mount Sinai and Kadesh.

Since Jethro is clearly associated with the Holy Mountain and appears to be its high priest, it seems that Moreb would be in the eastern part of the Sinai, perhaps in the general area of Midian.

Kadesh-Barnea is also in that general area. Mount Horeb would be reasonably close to Kadesh since this was the staging area used by the Israelites for the two years before their trek into the wilderness. Jebel Halal, a flat–topped mountain just west of Kadesh-Barnea, appears to have been the historical Mount Sinai or Horeb.

The location of Mount Sinai in an area which is the conjunction of Sinai, Seir, Paran, and Kadesh is strongly indicated in Deuteronomy 33 at the time that Moses is recapitulating the events of the Exodus just before he died:

“The Lord came from Sinai. He shone upon his people from Seir. He appeared from Mount Paran, and He came from Meribath-Kadesh, while lightning flashed from his right hand.”

In this remarkable statement, Moses juxtaposes these four locations as if they are all the same place. In this respect, it is pertinent that the goal of the invading eastern kings some 600 years earlier was a place called El-Paran in the northern Sinai.

Thus, Mount Horeb, Mount Sinai, and Mount Paran appear to be names for the same mountain or perhaps complex of mountains in the northern Sinai, which served as the alternate space center after the destruction of Baalbek. Kadesh and its complex of oases were part of this network.

The main evidence that Mount Sinai was fairly close to the Kadesh oasis is provided in the statement from Deuteronomy 1, where the distance between the two is stated in travel time:

“It is eleven days from Horeb to Kadesh-Barnea by the Mount Seir route.”

It must be assumed that the Israelites were moving fairly slowly in their Exodus from Egypt since their rate of movement was determined by their flocks of sheep and cattle who had to forage as they travelled. In view of this restriction it would take about eleven days to travel from Mount or Jebel Halal to the complex of oases at Kadesh, which is about thirty miles away.

There is an interesting legend in the oral tradition of the Jews on how Mount Sinai was chosen as the place of the deity. Called “The Contest of the Mountains,” it describes how Mount Tabor, Mount Hermon, and Mount Carmel fought among each other for the honor to be the resting place of the “Shekinah of the Lord,” in other words, the landing place for his space vehicle. The dispute was settled by a voice from heaven, which told them:

Mount Tabor is 1,938 feet high, Hermon is 9,055 feet, and Carmel is 1,791 feet. Mount Halal is 2,994 feet high. The mountains in the southern Sinai, Mount Musa and Mount Ekaterina, which are traditionally identified as Mount Sinai are 7,497 feet and 8,668 feet respectively. This height alone would of course eliminate them from the legend. In addition, they have not been associated with the ancient religion of the Canaanites.

Mount Tabor, Carmel, and Hermon were all sacred to the ancient people of Canaan. In the Second Millennium BC, these three mountains formed a trilogy of places sacred to Baal, where ancient shrines to this god were located. The fact that these three mountains were considered by the Hebrews to be the location of their holy mountain shows the Canaanite elements in the Hebrew religion at the time.

The legend states that a low mountain was selected to be the resting place of the spacecraft. Mount Halal near Kadesh is a low mountain with a flat top that not only fits the legend well but is well suited by virtue of its shape as a launch and recovery pad.

THE SIGNIFICANCE OF THE KADESH COMPLEX

The area around Kadesh-Barnea seems to have been of major importance in ancient days. It appears to be one of the goals of the invading kings in the year 2085 BC. After defeating the fortresses of the Rephaim in the Trans-Jordan, they then crushed,

“The Horites in the hill country of Seir, near El-Paran, which is on the edge of the wilderness. They swang back to En-Mishpat (now Kadesh) and subdued all the territory of the Amalekites, and also the Amorites who dwelt in Hazazon-Tamar (En-Gedi).”

They must have by-passed Kadesh to strike their main target – the space complex at Mount Sinai (El-Paran). Then they swang back to destroy the fortifications and space support facilities at Kadesh. Continuing north, they then destroyed the citadel of En-Gedi, which protected the Valley of Siddim from the south.

The name Kadesh-Barnea (Kadesh means sacred) is usually applied to a whole complex of oases fed by natural springs in that area. It was heavily fortified in early times. Remains of numerous fortifications in the area date to about 2000 BC, at which time they appear to have been destroyed never to be rebuilt.

The area of Mount Sinai and Kadesh was of major significance to the Hebrews since it was a staging area for them during the days of the Exodus. It was from here that they were told to send scouts into Canaan to survey the land and report on the state of the native defenses.

The scouts did not run into the main body of Amalekites for by that time they had passed into Egypt. They mingled with the inhabitants of the area as far north as Hebron. What they found and reported to Moses was discouraging – the land was inhabited by Anakim, who like the Amalekites were fierce warriors. They presumably saw also the glacis-type fortresses of the Anakim.

At Kadesh the news was badly received by Moses who now realized that his small disorganized army could not conquer the remnants of the Rephaim. From here, a group of the tribal leaders decided to attempt a foray into the land of Canaan and they were soundly defeated at Hormah. This marked the end of their attempts to penetrate directly into Canaan.

After two years at the Kadesh oasis, the Israelites sent a delegation to the kings of Edom and Moab for permission to pass unopposed through their land to the Trans-Jordan. They were refused permission, and the Hebrews had to take the long roundabout way by that of the Red Sea.

In the eleventh month of the 40th year, Moses addressed his people from Mount Nebo just before crossing the River Jordan, as stated in Deuteronomy 2:

“Thus after you had remained at Kadesh all that long time, we marched back into the wilderness towards the Red Sea … and skirted the hill country of Seir a long time … The time that we spent in travel from Kadesh-Barnea until we crossed the Wadi Zered was 38 years, until that whole generation of warriors perished from the camp.”

The Old Testament is strangely silent on those 38 years that the Israelites spent in the wilderness from Kadesh to the entrance to the Trans-Jordan. It is obvious that there are some missing books to the Old Testament, such as those mentioned elsewhere – the Book of the Wars of Yahweh, and the Book of Yasher.

Whether omitted on purpose by the priestly scribes or just lost in antiquity, these omissions relate to critical periods in the history of the Hebrews. Their recovery would solve many of the puzzles of the Old Testament.