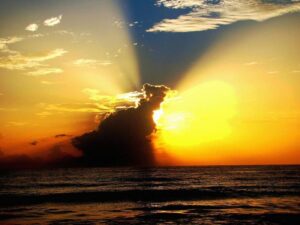 Here is a very important Key of Truth!!!

Is it possible to differentiate between the two versions of what appears to be one word?

The book of Revelations describes an era known as the “Last Days”, during which time an amazingly powerful leader will arise to rule the world. His power will extend to the four corners of the world; he will dominate as a political leader, and as a religious figure.

The armies of the world would be his to use, and this force will be employed to pursue his domination. His religion, and religious beliefs will spread like wildfire, as humanity will willingly succumb to his philosophies and understandings.

His rule will unite the world into a one-world government, which would automatically create economic stability and strength, as well as bring peace to all humanities no matter what race or culture.

Revelations explicitly defines the fact, that all humanity will willingly accept this leader, and all people will even worship in his name.

The English and Russian translations of the book Revelation, call this individual the “Anti-Christ”, the religious world Leader who is against Jesus Christ, and against his followers known as Christians.

The reason the World’s Christian Population believe this scenario, is because of one minor translation discrepancy; one tiny letter. The term “Anti-Christ”, is actually a injudicious mistake on the part of the Translator-Redactors, the true term is actually “Ante-Christ”.

In all other languages, and especially in the original antiquated versions, the Bible follows the original spelling of the word; and the word is correctly spelled “Ante-Kris-Stos”.

Who cares!!! It obviously sounds the same, so it must mean the same thing? This is actually the furthest thing from the truth…

The term “Ante” has a completely distinctive meaning of its own, and once you truly understand the original concept of the Author of Revelation, you will find that your focus and attention is placed on a completely different individual.

He repeatedly used the term the “Ante-Christ”…

This Book was written shortly after the advent of the known Israelite Messiah known as Joshua Ben Joseph, or “Yeshua”, which of course means “Salvation”, and is referenced as “The Savior”. Anyone who knows True History of the ancient civilizations, will know that Joshua was actually the second Messiah on the scene; the advent of his life was happening only 2000 years ago. The First Messiah, the Messiah of the Roman/Greek/Persian/Babylonian/Assyrian Empires has been on the scene well over 6000 years now.

This first Messiah was known as the “Son of Zeus”; Blessed and Anointed to become the Savior of the World by the Father Zeus, who is the “God of the Sun”; the one Supreme Deity of the entire Universe.

This son’s name of course, Ious-Zeus-Kris-Stos, or as in modern terms, “Jesus Christ”.

The Term “Ante-Christ” does not mean “He Who Is Against Christ”, it explicitly means, “The First Christ”; “The Christ Who Was From The Beginning”.

Ask yourself these very important questions:

Now lets look at the Pagan Roman Messiah, Jesus Christ, and at his followers, believers, and especially the leaders. From the beginning of recorded history, almost six thousand years, these people have had an extremely violent and destructive history. War is their tool of promulgation, for their continuous desire is World Domination. Political Supremacy, Wealth, Power are the basis of their existence, and the reason for their veracity.

They will use any strategy to their advantage: force, violence, the power of philosophy and persuasion; even religion and the personal elements of the soul, to further their cause. Truth is a commodity to be bought and sold, and can be utilized and manipulated as necessary to further the cause.

The Prophet John was looking to the near future, to the third century after the True Messiah of Israel, and his followers known as the Essene. The Dominating World Empire of the Romans was going to create a monstrosity, which would have far reaching impact upon the entire world for many millennia to come. They were going to Resurrect the Faith and Worship of their Original Savior Messiah, by shrouding him in this relatively new phenomenon of Israelite Messiah-ship.

The Emperor created a new office, called the “Papacy”, which simply translates to “Man/God on Earth”, the Living Representative of the most High God Zeus, the God of the Sun.  The Pope was the living embodiment of the Heavenly God Zeus, and the Vice-Regent of his Son “Je-Zeus”. When he spoke, it was God Speaking through him; when he made a Decree or a decision relating to his Political/Religious Office, it was the Mind of God, that moved through his mind, that created that very thought.

He was going to unite the world, once and for all, “one nation, under god,” where all humanity would be subjugated, ruled, and commanded from this one head post. A political/military/religious leader of the entire known civilized world.

This new Regime, followed after the footsteps of their predecessors, the Pagan Proselyte Jews of the Old Testament Era. Just as the Orthodox Jews of the past, now the Catholic/Orthodox Church of the Future. You create the religion first; then institute your version of philosophy, dogma, law, commandments, and rules; then you write the scriptures to fit the criteria of your agenda. This way it would seem that the Living Gods of Heaven commanded these very same principals.

Lets look at the God of the old Pagan Jew Era. He was brutal and tyrannical, he took pleasure in making mankind suffer in their disobedience to his voice. He established a religious autocracy, which all humanity had to obey without question, or suffer grave consequences.

He was a God of War, and delighted in the destruction of non-conforming populations. He created very strict rules and regulations of living, of which cruel punishment was meted out upon those who could not adhere, whether by design, or not.

The image portrayed by the religious bodies, was perpetrated upon the World Populations, by knife and sword; by guns and bombs. Obey, or be sent to eternal condemnation and hell-fire, suffering and pain would become your lot for all eternity.

Whereas!!! The Messiah of the True Living God of the ancient Israelites had a completely different message; “The Kingdom of God Was Within You”. Find this Kingdom, and you will have eternal peace, both here on earth, as well as in the after-life.

The “Ante-Christ”, followed in the footsteps of his Father Zeus, A God of War and Destruction. He brought peace to the World by utilizing weapons of war. Victory was attained through the spilling of blood.

The snake/serpent/dragon, was referenced by the True Messiah, as the Religion of the Ancient Pagan Jews. In the year 325 A.D.; the First Beast rose up out of the oceans and the seas of humanity; this reference concerns the next generation of vile deceivers and corrupters of True Life, True Love, and the True God, the Pagan Christian Catholic/Orthodox Church of Greece/Rome.

The Child of this unholy union, became the second Beast, who picked up the banner of its parent, and gave life back to the religion of both the dragon and of the first beast. In the early fifteen hundreds the Protestant revolution swept the world, with violence and force; it wrested freedom from political tyranny, but was joined at the hip, upon the religious platform. It followed in the footsteps of its mother, to become the leading world power upon this planet.

War after war, victory after victory, ensures that the Catholic Cross is hanging upon every church building all across the globe. “Believe in our Messiah, and you shall receive everlasting life, disagree with us, and your blood will flow upon your desert sands”, is the motto.  Even if the cross is not present upon the halls of worship, the ever present Bible of the Pagan Christian Church lays open upon every pulpit and altar throughout every country in the world; ensuring a unified stance of both faith and worship of the eternal gods of Mythos.

The Ante-Christ has already subdued the entire world, both through religion, politics, military might, and economics; all kings, of every nation have already kissed the ring of the Pope, willfully, or even unwillingly, but that is of little concern, the matter has been fulfilled.

The Ante-Christ is the Victor!!!

For even the very Elect have been deceived by his lies…

This includes the very descendents of the Apostolic Churches scattered throughout the world.