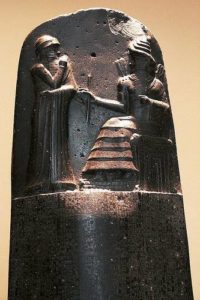 These are Laws of justice, which Hammurabi, the wise king, established.

A righteous law, and pious statute did he teach the land. Hammurabi, the protecting king am I. I have not withdrawn myself from the men, whom Bel gave to me, the rule over whom Marduk gave to me, I was not negligent, but I made them a peaceful abiding-place. I expounded all great difficulties;

I made the light of truth shine upon them. With the mighty weapons which Zamama and Ishtar entrusted to me, with the keen vision with which Ea (Enki) endowed me, with the wisdom that Marduk gave me, I have uprooted the enemy above and below (in north and south), subdued the earth, brought prosperity to the land, guaranteed security to the inhabitants in their homes; a disturber was not permitted.

The great gods have called me, I am the salvation-bearing shepherd, whose staff is straight, the good shadow that is spread over my city; on my breast I cherish the inhabitants of the land of Sumer and Akkad; in my shelter I have let them repose in peace; in my deep wisdom have I enclosed them.

That the strong might not injure the weak, in order to protect the widows and orphans, I have in Babylon the city where Anu and Bel raise high their head, in E-Sagil, the Temple, whose foundations stand firm as heaven and earth, in order to bespeak justice in the land, to settle all disputes, and heal all injuries, set up these my precious words, written upon my memorial stone, before the image of me, as king of righteousness.

The king who ruleth among the kings of the cities am I. My words are well considered; there is no wisdom like unto mine. By the command of Shamash, the great judge of heaven and earth, let righteousness go forth in the land: by the order of Marduk, my lord, let no destruction befall my monument. In E-Sagil, which I love;

Let my name be ever repeated; let the oppressed, who has a case at law, come and stand before this my image as King of Righteousness; let him read the inscription, and understand my precious words: the inscription will explain his case to him; he will find out what is just, and his heart will be glad, so that he will say:

“Hammurabi is a ruler, who is as a father to his subjects, who holds the words of Marduk in reverence, who has achieved conquest for Marduk over the north and south, who rejoices the heart of Marduk, his lord, who has bestowed benefits for ever and ever on his subjects, and has established order in the land.”

Hammurabi, the King of Righteousness, on whom Shamash has conferred right (or law) am I. My words are well considered; my deeds are not equaled; to bring low those that were high; to humble the proud, to expel insolence. If a succeeding ruler considers my words, which I have written in this my inscription, if he do not annul my law, nor corrupt my words, nor change my monument, then may Shamash lengthen that king’s reign, as he has that of me, the King of Righteousness, that he may reign in righteousness over his subjects.

If this ruler do not esteem my words, which I have written in my inscription, if he despise my curses, and fear not the curse of God, if he destroy the law which I have given, corrupt my words, change my monument, efface my name, write his name there, or on account of the curses commission another so to do, that man, whether king or ruler, patesi, or commoner, no matter what he be, may the great God Anu, the Father of the Gods, who has ordered my rule, withdraw from him the glory of royalty, break his scepter, curse his destiny.

May Bel, the Lord, who fixeth destiny, whose command can not be altered, who has made my kingdom great, order a rebellion which his hand cannot control; may he let the wind of the overthrow of his habitation blow, may he ordain the years of his rule in groaning, years of scarcity, years of famine, darkness without light, death with seeing eyes be fated to him;

May Bel order with his potent mouth the destruction of his city, the dispersion of his subjects, the cutting off of his rule, the removal of his name and memory from the land.

May Belit, the great Mother, whose command is potent in E-Kur (the Babylonian Olympus), the Mistress, who harkens graciously to my petitions, in the seat of judgment and decision (where Bel fixes destiny), turn his affairs evil before Bel, and put the devastation of his land, the destruction of his subjects, the pouring out of his life like water into the mouth of King Bel.

May Ea/Enki, the great ruler, whose fated decrees come to pass, the thinker of the gods, the omnipotent, and omniscient, who maketh long the days of my life, withdraw understanding and wisdom from him, lead him to forgetfulness, shut up his rivers at their sources, and not allow corn or sustenance for man to grow in his land.

May Shamash, the great Judge of heaven and earth, who supporteth all means of livelihood, Lord of life-courage, shatter his dominion, annul his law, destroy his way, make vain the march of his troops, send him in his visions forecasts of the uprooting of the foundations of his throne and of the destruction of his land.

May the condemnation of Shamash overtake him forthwith; may he be deprived of water above among the living, and his spirit below in the earth. May Sin, the Moon-god, who is the Lord of Heaven; the divine father, whose crescent gives light among the gods, take away the crown and regal throne from him; may he put upon him heavy guilt, great decay, that nothing may be lower than he.

May he destine him as fated, days, months and years of dominion filled with sighing and tears, increase of the burden of dominion, a life that is like unto death. May Adad, the lord of fruitfulness, ruler of heaven and earth, my helper, withhold from him rain from heaven, and the flood of water from the springs, destroying his land by famine and want; may he rage mightily over his city, and make his land into flood-hills (heaps of ruined cities).

May Zamama, the great warrior, the first-born son of E-Kur, who goeth at my right hand, shatter his weapons on the field of battle, turn day into night for him, and let his foe triumph over him. May Ishtar, the goddess of fighting and war, who unfetters my weapons, my gracious protecting spirit, who loveth my dominion, curse his kingdom in her angry heart; in her great wrath, change his grace into evil, and shatter his weapons on the place of fighting and war.

May she create disorder and sedition for him, strike down his warriors, that the earth may drink their blood, and throw down the piles of corpses of his warriors on the field; may she not grant him a life of mercy, deliver him into the hands of his enemies, and imprison him in the land of his enemies.

May Nergal, the might among the gods, whose contest is irresistible, who grants me victory, in his great might burn up his subjects like a slender reedstalk, cut off his limbs with his mighty weapons, and shatter him like an earthen image.

May Nin-Tu, the sublime mistress of the lands, the fruitful mother, deny him a son, vouchsafe him no name, give him no successor among men. May Nin-Karak, the daughter of Anu, who adjudges grace to me, cause to come upon his members in E-Kur high fever, severe wounds, that can not be healed, whose nature the physician does not understand, which he can not treat with dressing, which, like the bite of death, can not be removed, until they have sapped away his life.

May he lament the loss of his life-power, and may the great gods of heaven and earth, the Anunnaki, altogether inflict a curse and evil upon the confines of the temple, the walls of this E-Barra (the Sun temple of Sippara), upon his dominion, his land, his warriors, his subjects, and his troops.

May Bel curse him with the potent curses of his mouth that cannot be altered, and may they come upon him forthwith.

Here ends the illustrious blessings and cursings of the great leader of mankind, the king of Babylon, Hammurabbi.

One of the wisest of all men, an individual that established civil and constitutional laws which all must obey and adhere to. Laws dedicated to the equality of all constituents who lived within the borders of a nation that spread to the four corners of the world. Laws that governed every aspect of living and existence, including the rules and regulations of a National Religion dedicated to the worship of the Anunaki (Elohim) Gods of Heaven and Earth; the Creator Gods.