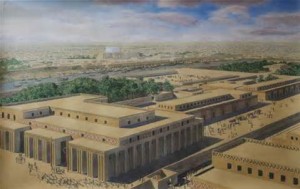 The Holy Laws Of Babylon…

This may seem strange to the average Christian, but it is a known fact, that the vast majority of mankind’s honorable, equitable, just, and holy laws of living were created within the nation of Babylon.

The fraudulent story depicting the most High God coming down upon Mt. Horeb, in order to give the chosen race of Jews the amazing, “Ten Commandments” (a kindergarteners view of law and order), is absolutely absurd! It is as if we are to understand that all other nations were nothing less than Heathen Barbarians, living in godless despotism, without civil laws, rules, or regulations of orderly living.

Let us take the Nation of America as an example!

We are a nation of constitutional laws designed to protect the rights of individuals; and these are regulated equally upon all the various classes of humanity, no matter your financial or social status.

There exists a Legislative and Judicial Branch within the Government that regulates the laws, and makes sure that the citizens live accordingly.

Less than one hundred and fifty years ago, literally every man living in this nation needed to carry weapons and fire-arms for self defense; even though the laws existed, there were very few law-men that could ensure that all lived within the parameters of those laws.

Today! It is totally unrealistic for the masses to be walking around with six guns strapped to their hips, or a rifle slung over their shoulder; there is simply no need for it. We have a well-organized police department to enforce the laws, and a complex system designed to capture and punish those who step out of bounds.

One of the most precious aspects of our nations laws is that it allows all men to live equally regardless of ethnicity, race, or religion. In so many nations, all across the world, ridiculously rampant prejudices give men the right to persecute those who did not look like you, believe like you, did not speak like you, or whose original culture was very different than yours.

Even today, there a multitude of nations that are guilty of ethic cleansings; with mass genocide taking place, and no reprimand for the guilty parties. Quite often, it is the official governmental stance to condone wanton killings of those deemed undesirable.

America is the apple of the world’s eye!

Hundreds of thousands of immigrants arrive each year, fulfilling life long dreams of independence, freedom, and peace, which our country ensures to each new arrival…

Are we to believe that America was the founding Father of all Good Civil Laws?

Do these Laws exist because we are a Christian Nation?

A Nation that places all her morals upon Christian Principals gleaned from the Holy Bible?

Or is our very foundation built upon the primary principals established with the greatest Nation ever to exist upon planet earth; the nation of Babylon?

I personally believe that America, is one of the few countries in the world that is an absolute carbon copy of Babylon!

This includes her form of governance, her economics, her military strength, and her religious base; which of course is Modern Day Christianity.

In the next three articles, I am going to include official documentation coming from the archival records of the City of Babel, from within the Nation of Babylon, that proves undoubtedly that the very foundation of all good and honorable laws were given to the leaders of Babylon from the Anunnaki Elohim Gods, and primarily from the Enki Family.