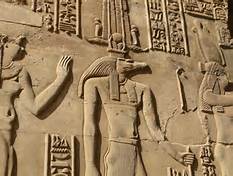 The story of the world

Etymology is the extremely important study of language! All words have “Root” derivatives that contain a very exclusive meaning, despite mankind’s constant ongoing linguistic evolution; certain traits are passed down throughout the ages.

In Russian, the word for red-meat is “Miassa”!

In Egyptian, the word for crocodile meat is, “Messa”

In Egypt, a “Messiah”, was a member of Royalty, both kingly, and priestly, that has been Anointed into a very important position of Governance; Politically, and or, Religiously. Yes! This word does not belong to the Israelites; it is an exclusive Egyptian term used to delineate the Royal Elite from the common masses.

It was unheard of within the Israelite communities to utilize this term; it would have been deemed a “derogatory remark” meant to belittle someone…

In ancient Egypt, the river Nile was considered the source of all Life, she brought water to the parched tongues of millions of her citizens; she brought the flood waters that brought high concentrates of mineral compounds, that made fertile the vast farmlands; she irrigated those farm-fields, making the land a virtual Garden of Eden…

In Egyptian Cosmology, the Crocodile was considered the King of Beasts; the king of the waters. A most noble and holy creature…

Only the highest-level Elite Family members could ever be anointed with the Fat rendered from the meat of the crocodile. The oil was called the “Messianic Oil”, which rendered the recipient most Holy and Special beyond any mere mortal man.

Of Course! This poses a question!

Why in the world, would the True Israelite “Messiah”, ever be called a “Messiah” in the first place? This is an Enigma! It is an Oxymoron!!!

It is completely backwards! It is a statement that defies total Logic!!!

I do not believe for a moment, that the True Savior of Mankind, would ever use a Title, reserved only for the Egyptian Elite; those who have been smeared with crocodile Fat! There must be an explanation!

The search for this explanation has led me to many libraries, as well as to the vast repository known as the Internet.

The term, “Messiah”, which we use today in regards to the individual considered the “Savior of Mankind”, is no accident!

But there is an underlying secret, to a hidden meaning wrapped up within this Title, which in essence brings to light, who the Hierarchies, of “False Religion”, specifically propagate to the (sort of, believing) masses.

Who is this Messiah after all?

And “Why” does he exist within the hearts of billions of people?