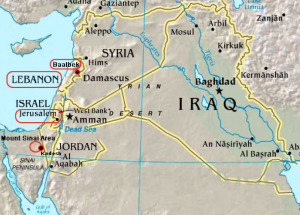 THE SPACE COMPLEX MOVED TO THE WEST

Today, the climate of Palestine is harsh and dry. There are many indications that it may have been much different 5,000 years ago. Researches based on pollen spectra and profiles obtained from all of Palestine reveals that rainfall was much more abundant in the Third Millennium BC.

Research at Tel Aviv University has shown that rainfall at that time had a different pattern. Rain probably originated from warm fronts pushed into Palestine by the western winds all the way from the Atlantic Ocean, whereas present-day thunderstorms originate over the eastern Mediterranean. This phenomenon would result in summer rains and subsequently a greater annual rainfall. This would explain the abundant vegetation as shown by pollen distribution and particularly the wider distribution of the deciduous oak in the past. It supports the statements in the Old Testament that refer to Palestine as “a land of milk and honey.”

The devastation of the lands by invading armies, subsequent overpopulation and overgrazing, and shifting weather patterns probably all played a part in changing the lands of the Levant to the semi-arid land that it is today.

The land of Lebanon, in particular, was lush and munificent. To this new garden of Eden the space facilities were moved and a city built to serve as the headquarters of the new launch platform and support facilities. It became the Biblical garden of Eden and the Sumerian “land of pleasant living.”

The old space platform at Sippar was now under the waters of the Persian Gulf. So was Larak, the control and communications center. It was moved to Ur-Salem, later to become known as Jerusalem.

An alternate launch site and control center was established at Jebel or Mount Halal in the northern Sinai or what is known Biblically as Mount Horeb or Mount Sinai.

A fortified support complex was located at the group of oases near Kadesh-Barnea to protect the eastern approaches to the space complex. The Chief Astronaut Utu, who previously had ruled Sippar, the space city, now reappeared in the land of Lebanon under his Semitic home of Shamash.

References to the three main sites of the space complex are found in the Book of Jubilees although they are couched in religious terms. According to this source, there were three places on Earth sacred to the Lord. These all fell into the allotment of lands assigned to Shem after the Deluge. Perhaps this explains why Shem was favored above all the other sons of Noah.

Jubilee lists these sites as:

It is clear from this passage the three sites were all fairly close to each other and were not spread out over the vast expanse of the Middle East. Jubilees says that they were “created as holy places one facing the other.”

With theological verbiage aside, the reference to the garden of Eden is Lebanon, whose capital city of Baalbek was “the dwelling of the Lord.” Mount Sinai is on the border of the wilderness of the Sinai and served as the alternate space complex. Mount Zion is one of the three peaks that make up the city of Jerusalem.

Its massive stone platform later became the location of Solomon’s Temple and is now occupied by the Islamic shrine called the Dome of the Rock. As the “navel of the Earth,” Jerusalem served as the headquarters and administrative center for the western space facilities.

Long before the days of the Hebrew kings, Jerusalem had been considered to be a sacred city by the native people of the land of Canaan. Called Salem or Ur-Salem (Capital City of Salem), it encompassed three peaks:

Mount Zion is presently occupied by the Moslem shrine called the Dome of the Rock and is reputedly the place where Solomon built his temple. The Moslem shrine is built on a fashioned rock 57 feet long and 44 feet wide. At present, four to six feet are above the floor, with caves and passageways reportedly underneath. In a way, the monolith stone is similar to the stone platform at Baalbek, although quite smaller.

The three peaks of Salem were some sort of control center similar in function to that of Larak or Nippur in ancient Sumer. In the Scriptures Jerusalem has been called the “center of the Earth” and the “holy mountain.” Mount Zion has been referred to as being “in the midst of the navel of the Earth.”

Remarkably, Jerusalem was not a city sacred to the Israelites before the days of David. It is only mentioned once in the Torah, the first five books of the Old Testament, and it is not until later in Joshua 10 that the name is encountered.

Actually, Shechem, a city north of Jerusalem, was regarded by the ancient Hebrews as sacred with the shrine located at nearby Mount Gezerin. Its holy status is reflected in its use as the storage place of the teraphims, the sacred idols or communications devices. In turn, this role may also be due to some as yet unknown reason for its importance, perhaps even as a regional radio with a permanent apparatus to contact the gods.

In Solomon’s time, the temple was built upon the monolith rock at Zion, which was at that time considered to be sacred. By then, however, its original use as a landing and launching platform was lost in the dim past, although it retained its holy status.

In the days of David, the stone was used only as a threshing floor, but David must have suspected its holy status when he purchased it to build the temple.

It was also near the rock at Zion that Jacob observed the angels going up and down a ladder or stairway to the heavens:

“He had a dream: a stairway was set on the ground, with its top reaching to the ski; and the angels of El were going up and down on it … Jacob awoke from his sleep … Shaken, he exclaimed, ’How awesome is this place! This is none other than the abode of El, and that is the gateway to heaven.’”

Coincidentally, the phrase “gateway to heaven” is the same terminology used by Gilgamesh to describe the land of Shamash in the story about his trip to the land of cedars where the gods took the shuttle to the orbiting mother ship