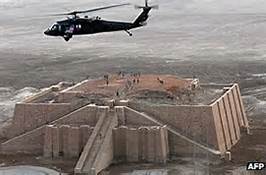 An extremely important part of human history revolves around this Great and Amazing place called the city of “Babel”.

Unfortunately! Our Indoctrinators have altered the true meaning to this crucial term, “Babel”; it would seem that they wanted to convey a message that depicted this city as a place of “Confusion”; Riotous Living, and Animosity towards the Gods.

But the truth unfolds a completely different story.

The very words , Ba-Bel” do not mean , “Confusion of Language” as we are taught; they explicitly mean, “The Gate To God”, which conveys a message of love, honor, dedication, and respect. But the “Secret” to this story goes far beyond the recorded chronicles of the, “Bi-Bel”, (the word Bible sounds curiously much like the words that describe the Tower of Ba-Bel)

This was a very large city located in central Mesopotamia; a capital city…

In the very center of the metropolis, was a very large seven step Ziggurat; a pyramid type of building with a very large flat surface upon its top; this was the famous Tower of Babylon, upon which King Nim-Rud supposedly showed his disrespect for the God of the Heavens.

This Ziggurat stands today within the country of Iraq, albeit, over the course of many thousands of years, it had virtually been buried by the perpetually moving desert sands. During the American/Iraq war, (during the first decade of the new millennium) the military specifically targeted this archeological site for excavation; not only did they unbury it, they dug very deep below its foundations in order to uncover the secret governmental archival chambers, which housed several hundred thousand clay tablets, which recorded the past history on this city’s Political Regimes.

It turns out, by historical registry, that the details of this city and its era have all but, been corrupted beyond recognition.

According to the Bible:

“They, as if built a Tower that was so high that it reached up into the clouds”.

“Nimrod climbed up this Tower in order to shoot arrows at the Heavenly Father”.

“This Angered God so much that he sent his angels to confuse the language, to the point that mankind began to fight and bicker amongst themselves.”

“War broke out, and all the citizens fled the city, each to his own group; those whom they could understand”…

“A giant earthquake buried the city, and the Tower was reduced to dust”…

Apparently! A kindergartners view on reality!

Nimrod was a direct descendent of the Famous Cain (of the Cain and Abel Story); the term Cain is not a name, but a Title.

A direct reference building upon the Adam and Eve story…

According to true historical accounts, Adam and Eve were not singular individuals; as if the First Created Man and Woman upon this earth. They were different races of mankind that were created within the bio-engineering facilities that experimented with gene splicing and cloning.

The Adama race were simply the Red/Brown races; farm laborers that worked cultivating the farms and orchards of the Gods.

The Eva Race was the white race, that was created from a greater percentage of Elohim Gene material, these Eavittes, were taken into the God’s homes as personal servants, concubines, and wives. Their offspring became the Neplillim, or more correctly, the Cainnittes; a new Family of Dynastic Ruler, who worked as overseer of the working class of humanity.

Cain was a King, and all of his descendants were Kings, and governmental Satraps, that owed their allegiance unto the Supreme Elohim Beings; the Gods of Heaven and Earth.

The people who built this city were remnants of the anti-deluvial era.

They survived the Great “Noah’s” Flood, and of course, they understood that certain factions within the Elohim Hierarchies were in favor of mankind’s total annihilation, namely the God Enlil/Jehovah.

It was the God Enki, and his servants that spread the word that a catastrophic flood was to take place, and mankind needed to flee to higher ground.

Enki, instructed Noah in how to build the Ark, that was to save the “Seed Bank”, that contained the genetic material of all living creatures upon the face of the earth, including the seeds of millions of diverse plants.

Yes! Nimrod and his citizens were in direct contradiction to the Supreme Leader of the Anunnaki Elohim Overlords, but this was done in order to honor and Glorify the God of Salvation, Enki.

Enki was the Supreme Scientist and Bio-Engineer, that worked diligently to create humanity. And even though they were created as a worker/slave race, in his heart he saw mankind as his personal accomplishment, of which he was very proud.

Enki was in all truth! The Father of Humanity! He was its Creator…

Of course! Enlil, also known as Jehovah, was greatly jealous of this honor and respect, of which he was greatly undeserving.

Under Enki’s Leadership, mankind was allowed to prosper and flourish; they were given crucial knowledge of the sciences and were even granted many highly advanced forms of space technology.

They were allowed to build sophisticated civilization for themselves, were they could rule the earth, as if they were Gods.

The Ziggurat was a Space Port, from which Rockets could ascend and descend into the atmosphere, The lower levels contained the communications and guidance facilities that oversaw the flight patterns as they flew, not only around the earth; they even went to other planets such as the Moon, and Mars.

Enlil, also known as Jehovah, sent in spies to undermine this spaceport facility, and this was done by high-jacking the computer hard-drive service center. By simply changing the pass codes, the average technician, lost access to the main-frame, thusly, all flights were ground to a halt.

The Space-Port was devastated! Out of fear of further reprisals, many of the citizens simply fled into the wilderness to begin building new cities…