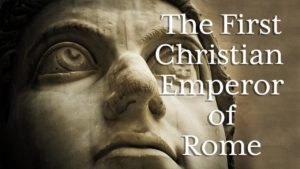 In order to better understand the religion of Christianity and the evolution of the Vatican, one needs to have some knowledge about its early history.

Peter and James at the Jerusalem Congregation saw their influence dwindle in the decades that followed Yeshua’s death for this newly formed Roman religion of Christianity with its fictitious man-made god-man they were claiming to be Je-Zeus Christ. This shift to the Roman religion of Christianity had already been underway for some time. But the final blow that came for the Jerusalem Congregation of Yeshua, was when the Romans destroyed Jerusalem in 70 CE and again in 132 C.E. The carnage of these two events had scattered the people of Yeshua and removed their power base.

In the ensuing void, the Christian gentile converts to the newly formed Roman religion of Christianity had easily took over and became the domonate religion. This perverse heathen religion called Christianity quickly began to spread throughout the territoriality of the Roman Empire. During this time frame, Christianity was a haphazard collection of various sects with often wildly divergent beliefs that all centered around the Christian heathen god, Je-Zeus Christ. The early Christian Church fathers and theologians desperately tried to create a single orthodox base for their religion, but none of these efforts succeeded until the fourth century CE.

As Christianity spread through the Roman Empire, it was feared by many Emperors of Rome that it may also take over the power base of the Empire. Therefore; Christianity was outlawed in the Roman Empire until 313 CE, when a woman named Helena converted to Christianity. Helena just happened to be the mother of the Roman Emperor Constantine, and she prevailed on him to legalize the religion. Constantine did her one better, he not only legitimized Christianity for the first time but exerted his political might to force the divergent Christian sects into an uneasy unity. Constantine was greatly motivated for political stability. He was not a Christian, he worshiped a sun-god, and wasn’t baptized until he lay on his death bed. Nevertheless, he was a force to be reckoned with. Constantine had a hand to directly shape the theological content of Christianity. He convened the Council of Nicea in 325, bringing together the scattered bishops of the Christian communities that were located throughout the Roman Empire.

Constantine had forced them to agreed on a single theology for this perverted, heathen religion known as Christianity in order to bring some peace and stubility upon his Empire. The resulting “Nicene Creed” became the Roman Catholicism of today. Many of these Councils would follow to trash out the various beliefs they had about the divinity of their fictitious god, the virgin birth, the Holy Spirit and the resurrection of the dead. But a time came when the question of who had direct sucsession to Peter came up. In that the Catholic Church claims to have apostolic succession, an unbroken chain of valid popes that go all the way back to the Apostle Peter.

We know that during that era, the early Roman “church fathers” had forged documents to prove direct apostolic succession from the Apostle Peter. This document was later to be proven to be a forgery by scholers of early Christianity. Other documents the Vatican had, also proved to be forgeries. These documents were known as the false decretals, better known as the Pseudo-Isidorian Decretals. I had mentioned this on other web pages. What this Pseudo-Isidorian Decretals is, it is a forged document of the early history of the Roman Catholic Church. They consist of 115 documents that were supposedly written by the early church fathers. The purpose of the forgeries was to prove direct apostolic succession from the Apostle Peter in order to increase the power of the Pope and the Catholic Church. For three hundred years, the Pseudo-Isidorian Decretals and other forgeries were used by Roman Popes to claim authority over the Church in the East. One famous forgery came from the ninth century CE. It was a document that claimed that Emperor Constantine gave the eastern provinces of the Roman Empire to the Bishop of Rome.

The Pope used it to claim authority over the Greek Orthodox Church. The Patriarch of Constantinople rejected these false claims of primacy. When the Patriarch of the Greek Orthodox Church tried to discuss the issue with the Church of Rome, the popes often used these forged documents to back up the Roman Catholic Church claims. During the first 700 years of Christianity, the Greeks had looked upon Vatican Rome, as the “home” of forgeries. This, and many other issues resulted in the separation of the Greek and Eastern Orthodox Churches from the Roman Catholic Church. Additional documents that had been tampered with, and thus became forgeries, came to light. It was found out that many genuine documents the Vatican had, had been altered. Some of these documents were changed to say the very opposite of what they had originally said. Such was the case with the translation and re-writing of the New Testament. The Roman Church had a great deal to do in changing the text during the translation of the books, better known as “The Gospels” of the New Testament. This is what Protestant Christians relie upon as their faith. A faith based upon a book that had been corrupted by the early “church fathers” which is reflected in the Christian Bible.”