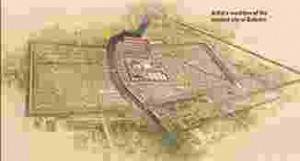 There are many who believe the Biblical insinuations concerning the meaning of the name Nimrod; the implications reveal a King that is accused of being a Rebel against God!

But this proposition is only a small fraction of the Truth…

There is much more to the story! And it is important to establish the true historical foundation if we are to correctly perceive the essential elements of this symbolic figure, which today represents the Mystery Religion of Babylon; a faith that is to sway the masses of ignorant believers unto the acceptance of a false messiah known as the Anti-Christ.

As most of you are aware, the war between America and the Taliban Regimes is winding down; many military personnel are in the process of returning home; back to their civilian life.

Recently, I had the opportunity to speak with one of these individuals who lives and works in my neighborhood. I asked him a very important question! As an American, how did you communicate with the native people of Afghanistan?

He looked at me very quizzically, and replied that it was virtually impossible to carry on any type of normal conversation; they do not speak English, and we do not speak Afghani…

So! When you entered into a village, and dozens of people would come out into the street, hollering, crying, screaming, frantically waving their arms; shouting at the tops of their lungs; cussing, cursing, yelling, and insulting you; how did you respond to them?

Again! He looked at me with a perplexed look; his response was that we couldn’t say a word to them, because we didn’t understand them!

Just like the words, “Sar-Gon”, are not a Name, but a Title also.

Sargon and Nimrod are one and the same person, but these are not his name!!!

The words, “Sar-Gon”, simply translates into, “The King of Kings”; and “The Most Illustrious Emperor”; denoting an individual of extremely high political caliber.

Nim-Rod, is also a very peculiar Title, and it represents a very unique era of this ancient political regime.

The word, “Nim”, or “Nem”, does not mean, “Rebel”, it simply means “Mute”; like in an individual who could not speak.

The words, “Nim-Rod”, translates directly into, “The Mute Generation”…

We have an individual that was considered a King of Kings, a man that was even elevated to that of being a “God”.

Now we must remember! That in the truest linguistic sense, God/Gad/Gott/Gutt, are words that do not mean, “A Deity”, they denote a “Traveling Warrior”; much like our own American service-men; those that left their Motherland to go off and fight a war on foreign soil. In essence, our service-men are “Gods”!

Now you will understand the meaning behind the title, “Nim-Rod”.

We envision a great army coming from a foreign nation, with the purpose of establishing a brand new monarchy; along with them, they brought the multitudes of foreign nationals from many conquered lands; speaking many diverse languages.

Not only did the soldiers have a difficult time communicating with each other, they could barely speak with the natives of the lands that they conquered. It was a vast generation of, “Mutes”.

Now this in itself is extremely important to a student of religious history. First off! It proves that languages were not confused in the nation of Babylon as was insinuated by the Biblical Redactors, but that many diverse languages already existed upon this planet, probably for untold millennia.

But this great Emperor, supposedly called, “Nimrod”, was the first to unite the masses into one nation, regardless of their national ethnicity or language base.

Nimrod was the president of just another country, very similar to many first world nations, such as America, England, Russia, and so on! Within these countries live a multitude of diverse races, and ethnicities, representing many hundreds of cultures and language bases.

Every time a new foreign family arrives to a new country such as America, the first, and even, second generation, has a very difficult time transitioning because of language and cultural barriers.

Even those who may be highly educated, cultured and sophisticated in their mother tongue, in a new land, they may as well be deaf and dumb mutes…

But this is only a part of the story…

Now let’s explore these words a little deeper; and a clearer explanation will suddenly appear, as to whom these traveling War-Lords were…

In our modern world, in many languages, the German Race are called, “Nem-Tzi”. The term, “Nem-Tzi”, represents the, “Ger-Man”, or in the German language, “Herr-Man”…

This is extremely important!

At the same time, we see this, “Traveling Spear-Man Warrior”, being labeled a, Nem-Itz”; “One Who Is Mute”!!!

The German People have been known from the beginning of time as the Tueton Tribes; a term which translates directly into, “Titans/Giants”, and of course, we all know that, “Titan/Giants”, was just another word for, “Powerful War Lords”…

People who conquered many foreign lands, nations, cultures, and races of mankind, which is why they are called the, “Nem-Tzi/Mutes”, just like the people of Babylon!

It is obvious! These are one and the same people…