Eyes Are For Seeing. 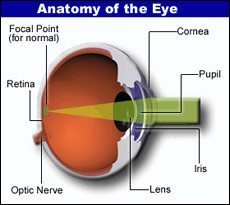 Eyes Are For Seeing.

The physical eye, through which we observe life, works by collecting Light that is bouncing off of all physical objects. The color spectrum radiates as every object’s inner energy interacts with the Light of the sun or any other artificial light generated by man himself.

The eye is one of the greatest miracles in human physiology, a magnificent work of science, biology, and art.

Vision is a complicated process that requires numerous components of the human eye and brain to work together. The initial step of this fascinating and powerful sense is carried out in the retina of the eye.

Specifically, the photoreceptor neurons (called photoreceptors) in the retina collect the Light and send signals to a network of neurons that generate electrical impulses that goes to the brain. The brain then processes those impulses and gives information about what we are seeing.

There are two different cells within the retina, the rod cells, and cone cells. These cells were named because of their shape as viewed in the microscope.

The element of physical sight is an ongoing scientific study that has garnered an exceptional volume of data that bolsters the understanding of the entire process of vision. But this in itself is not the greatest of mysteries when dealing with vision and sight.

There is another eye within the human matrix, which does not incorporate any visible physical luminosity or color from Light’s known spectrum. In fact, this vision works best when the physical eye is completely closed.

This is known as the inner eye, and it incorporates the function of three distinctive glands within the human brain.

The eye is the observer of reality – or the illusion of reality.

In the physical body, your eyes look outward; though it views objects upside down, it sends the message of what it observes to the brain, which interprets the image and makes it appear right side up to us.

But the human body has another physical eye, whose function has long been recognized by humanity. It is called the “Third Eye,” which in reality is the Pineal Gland. It is the Spiritual Third Eye, our Inner Vision, and is considered the Seat of the Soul.

The Pineal Gland is located in the geometric center of the cranium and is cone-shaped, much like the cone cell of the outer eye.

The Pineal Gland is about the size of a pea and is in the center of the brain in a tiny cave, behind and above the pituitary gland, which lies a little behind the root of the nose. It is centrally located directly behind the eyes, attached to the third ventricle.

Philosophers and Spiritual Adepts have long contemplated the true function of this mysterious gland; the ancients believed the pineal gland to be our connection to the Realms of Vision and Thought, also with the Realms of God.

This gland is activated by Light, and it controls the various biorhythms of the body.

It works in harmony with the hypothalamus gland, which directs the body’s thirst, hunger, sexual desire, and the biological clock that determines our aging process.

The pineal gland wakens when connecting to a higher frequency, such as can be experienced through oral stimulation. Powerful singing, sung with a rhythmic beat, literally opens the Pineal Gland to a different dimension of Light radiating from another, ethereal realm of God.

This is the Root of the Spiritual Revelation and the foundation of the Prophetic Vision.

Activation of this tiny gland releases a cocktail of chemical-based hormones that surge throughout the brain, causing the multiple glands to awaken into physical motion and vibration.

During this process, the inner-eye actually begins to see.

While the pineal gland’s physiological function has been unknown until recent times, mystical traditions and esoteric schools have long known this area in the middle of the brain to be the connecting link between the physical and spiritual worlds.

Considered the most powerful and highest source of ethereal energy available to humans, the pineal gland has always been important in initiating supernatural powers. The development of Psychic Talents has been closely associated with this organ of higher vision.

The third eye can see beyond the physical…

The pineal gland contains a complete map of the eyes’ visual field, and it plays several significant roles in human functioning.  There is a pathway from the retinas to the hypothalamus, called the retinohypothalamic tract. It brings information, about light and dark cycles, to a region of the hypothalamus called the supra-chiasmatic- nucleus.

From the SCN, nerve impulses travel via the pineal nerve (sympathetic nervous system) to the pineal gland. These impulses inhibit the production of melatonin.

When these impulses stop, such as at night, and light no longer stimulates the hypothalamus, pineal inhibition ceases, and melatonin is released. Therefore, the pineal gland is a photosensitive organ and an important timekeeper for the human body.

We are in a time when spiritual blindness is giving way to the open visions of the Seer-Prophets. Many are rushing into the supernatural realms of God to gaze upon His majesty and to learn the secrets of those things that were, and are, and those things yet to come.

There is great grace being released by the Holy Spirit as He begins to restore to the earth the prophetic gifts of those ancient men and women of God who spoke for God.

There is a unique relationship that the Holy Spirit is developing with those who are seeking the amazing Gifts of God. This relationship is initiated through a personal “Experience of Salvation,” accomplished by those who are on their Prophetic Journey of Life”.

The Holy Spirit desires to bring us into a close and intimate relationship with Him so that we could hear what He is saying and see what He is doing. This is the Key to the prophetic Seer anointing being activated in your life.

Therefore, spend time with Him in worship; be consistent in prayer; eagerly wait for His Presence; seek knowledge, understanding, and wisdom.

This sets the stage for visions, dreams, and prophetic encounters. Having this relationship, firmly established upon a foundation of truth, initiates prophetic journeys into the supernatural realms of God.