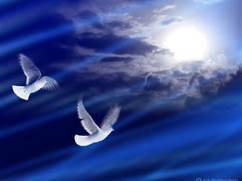 In the same way that the seven mornings of the week were devoted to the forces of the visible world, the seven evenings were given to the powers of the invisible realms, or the Angels of the Heavenly Father.

This Communion with the Heavenly Father, the Creator, the Light, the Ahura Mazda of Zoroaster, was the Essenes’ central communion, dedicated to the totality of cosmic laws and to the realization that the universe is a process of continuous creation in which man must take his part by continuing the work of the Creator on earth.

The purpose of the Communion is to teach man the importance of union with the eternal and boundless cosmic ocean of all the superior radiations from all the planets, to make him receptive to these powers so that he may attain cosmic consciousness, enabling him to unite himself with the cosmic currents. Through this he can develop the creative abilities within him to the utmost and learn to use the creative principle in his life and surroundings.

The Essenes knew that only when man does this, could he reach his final goal; union with the Heavenly Father, the ultimate aim of all Essenes and the underlying purpose governing all their actions, feelings and thoughts.

The Essenes considered that the purpose of the universe can only be eternal life, and immortality; and that this can be achieved by man if he progressively creates the preconditions of his advance to higher and higher degrees of his individual evolution. They held that there was no limit to this progress since the cosmos is an inexhaustible store of energies available to man as he perfects his receptive organs and centers.

Through this Communion man can arouse his intuitive knowledge of the eternity of life in the universe and his own unity with this eternal life and the whole cosmic order. Through it he can learn the importance of overcoming gravity in the earthly currents of thought and become conscious of the superior currents’ activity and role in the individual’s and the planetary evolution.

This overcoming of gravity and absorbing and utilizing the superior currents from this and all other planets was the highest mystical accomplishment of the Essenes.

The Angel of Creative Work-Sunday Evening

This Communion was dedicated to all the great things which have been created by human labor: the great masterpieces of literature, art, science, philosophy and everything man has created as a superstructure on nature, the great values brought forth by previous generations and inherited by the present one.

The purpose of the Communion was to teach the importance of creative work and its paramount role in the individual’s evolution. It was also to enable him to absorb energies and power from the creative works of mankind, all of its masterpieces, and to use this power in all manifestations of his consciousness.

In the Essene Brotherhoods everyone carried on creative work of some kind, whether in the improvement of himself, the Brotherhood or mankind. The Essenes considered creative work the most adequate expression of love.

The Angel of Peace-Monday Evening

The Communion with the Angel of Peace was dedicated to man’s deep inner intuition of peace within himself and with all the infinite universe. In the Essene concept peace is one of the most valuable treasures of man and unless he realizes its true meaning he cannot have spirituality, without which his life can have no meaning. It was held that man’s most immediate duty is to create peace within himself and with everything around him; and that the work of peace begins inside himself.

The Essenes utilized all sources of peace in the universe and transmitted them to the world, one manifestation of which was in their universal greeting, “Peace be with you.”

The Angel of Power-Tuesday Evening

The Essenes conceived of the whole universe as a cosmic ocean of life in which currents of cosmic power are continually uniting all forms of life on all planets and connecting man with all other organisms.

The Communion made man conscious of these cosmovital forces surrounding him and within him. By becoming receptive to their activity he can absorb them through his nervous system and utilize them in every department of his life.

The Essenes were able to absorb and utilize these currents to a remarkable degree.

The Angel of Love-Wednesday Evening

Love was considered by the Essenes to be the highest creative feeling and they held that a cosmic ocean of love exists everywhere uniting all forms of life, and that life itself is an expression of love.

The purpose of the Communion is to teach man the importance and meaning of these superior currents of feeling in himself and in the surrounding universe; and to make him conscious of and receptive to them as a powerful source of energy and power which he can concentrate and direct in all manifestations of his consciousness.

In the concept of the Essenes, any individual who hurts any form of life outside himself, hurts himself equally, because of the dynamic unity of all forms of life in the cosmic ocean of love. The Essenes themselves expressed strong feelings of love to the whole of mankind, near and far, and to all forms of life on earth and in infinite space.

This love, which they felt was the cause of their living together in brotherhood communities; it was why they distributed all their surplus of food to the needy and went out of their way to teach the ignorant and heal the sick. They expressed their love through deeds.

This faculty of attracting and sending forth superior currents of feeling was one of their great mystical accomplishments.

The Angel of Wisdom-Thursday Evening

Thought was held by the Essenes to be both a cosmic and a cerebral function. They considered there is a cosmic ocean of thought pervading all space containing all thought, which is the highest and most powerful of all cosmic energies, never perishing and never lost.

By tuning in to all thought currents in the universe and the thought of all great thinkers of the past through communion with the Angel of Wisdom, man developed his ability to create powerful harmonious thought currents and attain intuitive knowledge and wisdom.

Through the application of this Communion the Essenes had great ability to send and receive powerful thought currents.

This Communion with the Angel of Wisdom completes the fourteen Communions of the Essenes. The morning Communions refer to the vitality of the body and their cumulative effect is the gradual strengthening and revitalizing of every organ of the body through the conscious control and direction of earthly forces.

The seven evening Communions are dedicated to the spiritual powers, which govern man’s higher evolution. Their cumulative effect is the revitalizing of the mind and all the superior forces within the individual, enabling him to receive and become attuned with all the higher oceans of love, life and thought, thus gradually developing all the superior potentialities of his being.

Each Communion of the fourteen represents a certain equilibrium, between the man making it and the angel or force communed with.