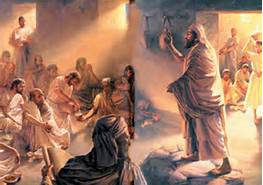 A third group of practices was held at noon each day of the week. These were contemplations calling upon the Heavenly Father to send His Angel of Peace to harmonize the different departments of man’s life. So important was peace to the Essenes that they had a special teaching concerning it, which they called the Sevenfold Peace.

The practice of the fourteen Communions brings about an inner experience or expansion of consciousness enabling the individual to make conscious use of the invisible forces of nature and the cosmos. The Sevenfold Peace shows the practical application of this expanded consciousness in the individual’s daily life in its relationship to the different aspects of life.

These Peace Contemplations were practiced in the following order.

Every seventh day, the Essene Sabbath, was consecrated to be one of the aspects of peace and communal gatherings were held, separate from the individual contemplations. These gatherings were for the purpose of considering the practical collective application of the particular peace being concentrated upon on that Sabbath.

Every seventh Sabbath was called the Great Sabbath and was dedicated to Peace with the Heavenly Father. This was the transcendental Peace, containing all other aspects of peace. Thus every phase of man’s life was given consideration, one after the other.

Such was the Essene pattern of Communion with the cosmic and natural forces and contemplation with the aspects of peace that showed them how to put the forces into practice in their individual lives. We shall not find its equivalent in any other system. It has the wisdom of eight thousand years behind it. It is not merely a form or a ritual; it is a dynamic, intuitive experience. It can establish the unity of mankind.

The Essenes practiced these Communions and Contemplations more than two thousand years ago with the individual known as the “Christ”.

We can practice them today...

From the “Thanksgiving Psalms”