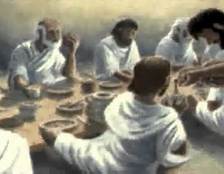 Part 3: The Essenes And Their Teachings

From the remote ages of antiquity a remarkable teaching has existed which is universal in its application and ageless in its wisdom.

Fragments of it are found in Sumerian hieroglyphs and on tiles and stones dating back some eight or ten thousand years. Some of the symbols, such as for the sun, moon, air, water, earth and other natural forces, are from an even earlier age preceding the cataclysm that ended the Pleistocene period.

How many thousands of years previous to that the teaching existed is unknown.

To study and practice this teaching is to reawaken within the heart of every man an intuitive knowledge that can solve his individual problems and quite possibly, the problems of the world.

Traces of the teaching have appeared in almost every country and religion. Its fundamental principles were taught in ancient Persia, Egypt, India, Tibet, China, Palestine, Greece and many other countries. But it has been transmitted in its most pure form by the Essenes, that mysterious brotherhood which thrived during the last three centuries B. C. and in the first three centuries of the Christian era at the Dead Sea in Palestine and at Lake Mareotis in Egypt.

In Palestine and Syria the members of the brotherhood were known as Essenes (the Pure Ones) and in Egypt as Therapeutae, which means, “The Healers”.

The esoteric part of their teaching (the inner secret knowledge) is revealed in their explanation to the Tree of Life, The Communions, and the Sevenfold Peace.

The exoteric (outer or public teaching) appears in “The Essene Gospel of Peace”, ” The Essene Genesis”, through the “Essene version of Moses’s Law”, and “The Sermon on the Mount.”

The origin of the brotherhood is said to be unknown, and the derivation of the name is uncertain. Some believe it comes from Enoch, and claim him to be their founder, their Communion with the angelic world having first been given to him.

Others consider the name comes from Esrael, the highly spiritual adepts; the “Elect” of the people of whom Moses brought forth the Communions at Mount Sinai where they were revealed to him by the angelic world.

But whatever their origin, it is certain the Essenes existed for a very long time as a brotherhood, perhaps under other names in other lands.

Their teaching appear in the “Zend Avesta” of Zoroaster, who translated it into a way of life that was followed for thousands of years. It contains the fundamental concepts of Brahmanism, the Vedas and the Upanishads. The Yoga systems of India sprang from the same source.

Buddha later gave forth essentially the same basic ideas and his sacred Bodhi tree is correlated with the Essene Tree of Life. In Tibet the teaching once more found expression in the Tibetan Wheel of Life.

The Pythagoreans and Stoics in ancient Greece also followed the Essene principles and much of their way of life. The same teaching was an element of the “Adonic” (Lord Adonai/Enki) culture of the Phoenicians; of the Alexandrian School of Philosophy in Egypt, and contributed greatly to many branches of Western culture: Freemasonry, Gnosticism, the Kabala and Christianity.

Joshua Ben Joseph interpreted the teachings in its most sublime and beautiful form in the seven Beatitudes of the Sermon on the Mount.

The Essenes lived on the shores of lakes and rivers; in mountains and deserts, away from cities and towns, and practiced a communal way of life, sharing equally in everything. They were mainly agriculturists and arbor-culturists, having a vast knowledge of crops, soil and climatic conditions which enabled them to grow a great variety of fruits and vegetables in comparatively desert areas and with a minimum of labor.

They had no servants or slaves and were said to have been the first people to condemn slavery both in theory and practice. There were no rich and no poor amongst them, both conditions being considered by them as deviations from the Law.

They established their own economic system, based wholly on the Holy Law of Life, and showed that all man’s food and material needs can be attained without struggle, through knowledge of the Universal Laws of Creation.

They spent much time in study both of ancient writings and special branches of learning, such as education, healing and astronomy. They were said to be the heirs of Chaldean and Persian astronomy and Egyptian arts of healing.

They were adept in prophecy for which they prepared by prolonged fasting, meditation, prayer, and study. In the use of plants and herbs for healing man and beast they were likewise proficient.

They lived a simple regular life, rising each day before sunrise to study and commune with the forces of nature, bathing in cold water as a ritual and donning white garments.

After their daily labor in the fields and vineyards they partook of their meals in silence, preceding and ending it with prayer. They were entirely vegetarian in their eating and never touched flesh foods nor fermented liquids.

Their evenings were devoted to study and communion with the heavenly forces.